Many individuals have purchased thread adapters to permit the use of an oil filter as a “solvent trap”.  The problem is that this adapter can also be used and is often intended to be used to create a suppressor.   The resellers on ebay who sold these adapters have all seemed to have disappeared and many of their customers are reporting being contacted by local ATF agents to collect the parts they purchased.

Recently we have had several clients contact us about purchasing these “solvent trap parts” and using them to make a Suppressor with a Form 1.  Apparently there is someone marketing these parts including baffles as a solvent trap to be used for gun cleaning.  It would not surprise me, if ATF shut down the ability of companies to sell parts as cleaning kits or solvent traps and then began targeting the customers of these parts in much the same way as the ATF continues to contact the customers of the companies who previously sold them eBay.

END_OF_DOCUMENT_TOKEN_TO_BE_REPLACED

While at the NRA Firearms Law Seminar in Nashville,  ATF ‘s attorney William Ryan made some interesting comments about the ATF, NFA, GCA and Gun Trusts:

END_OF_DOCUMENT_TOKEN_TO_BE_REPLACED

ATF has a history of approving Form 4 transfers to invalid trusts.  Today,  I received another example of an invalid trust that ATF had already approved a transfer for a suppressor.  As more people are learning about gun trust we are seeing more poorly written and in some cases invalid gun trusts.

Most invalid trusts are invalid because they do not name a beneficiary or someone lists themselves as the beneficiary. With the trust we received today, the trust did not meet the minimum signing requirements for the state where it was created.

I recently purchased a trust from a major suppressor manufacture, that had the same problem and while I live in Florida, the trust that was created online would would not be valid in Florida.  In addition, I made a typographical error entering the information and my repeated attempts to contact the company to fix the issue have been ignored.  For a company who prides themselves on customer service, this has been disappointing.   For the time being we would warn people to stay away from “easytrust” which is being advertised by a suppressor manufacture.  The trust  has many of the  problems associated with traditional trusts that can create liability for the trustees and beneficiaries of a poorly written gun trust and the one I received would not be valid in my state unlike their claims.

While talking with the client of the invalid trust, it turned out that he  had received the trust from a friend of his who told him it was prepared by a lawyer.  It would appear that the trust was not prepared by a licensed attorney or the lawyer was not familiar with trust law, gun law, or both.  A Gun Trust is very different than a revocable trust and one needs to consider each and every power and instruction in a trust and how they will interact with firearms owners and their desires to draft a well written gun trust.

With many online gun trusts popping up it is important to realize that a trust is not valid, nor is possession legal, just because the ATF approves a transfer.  If you have an invalid trust and are in possession of a firearm restricted by the NFA, you in violation of the NFA and could face both civil and criminal penalties.

A few benefits of a properly drafted Gun Trust include:

There’s been no shortage of misinformation and hyperbole about an ATF memo released on February 13th reported to “ban AR15 ammo.”  The memo describes a “framework” by which ATF proposes it would consider requests for “sporting purpose” exemptions under the federal statute banning the manufacture, importation or sale (but not possession) of “armor piercing” projectiles.  I’ve searched and research the law and the facts behind it with passion over the last two weeks. I’m tempted to write a legal brief in opposition, or at least to give it a thorough fisking.  But that would bore you and be wasted on the ATF at this point.

Instead, I’ll give you the skinny on what’s going on and the most effective thing(s) you can do about it.

END_OF_DOCUMENT_TOKEN_TO_BE_REPLACED

Today, the ATF stated that the time to process paper Form 1 and Form 4s – 6 months. Our feeling is that the backlog for paper forms is closer to 4 months when you consider that the eForms are only taking around 30 days and make up a substantial portion of the filings.

There is still no update on eFiling of ATF Form 4, but hope to have it addressed by late 2015.

END_OF_DOCUMENT_TOKEN_TO_BE_REPLACED

Here is the latest letter from the ATF that we received at 4:36 PM EST today regarding the SB-15 and Stabilizing braces. It seems to deal with “intent” but also introduces a new concept of “redesign” in an attempt to bolster the concept that use of a firearm can change the classification of it.

Our recommendation remains the same, for a $200 tax stamp why take the legal and financial risk.

The Firearms and Ammunition Technology Division (FATD), Bureau of Alcohol, Tobacco, Firearms and Explosives (ATF) has received inquiries from the public concerning the proper use of devices recently marketed as “stabilizing braces.” These devices are described as “a shooter’s aid that is designed to improve the single-handed shooting performance of buffer tube equipped pistols.” The device claims to enhance accuracy and reduce felt recoil when using an AR-style pistol.

These items are intended to improve accuracy by using the operator’s forearm to provide stable support for the AR-type pistol. ATF has previously determined that attaching the brace to a firearm does not alter the classification of the firearm or subject the firearm to National Firearms Act (NFA) control. However, this classification is based upon the use of the device as designed. When the device is redesigned for use as a shoulder stock on a handgun with a rifled barrel under 16 inches in length, the firearm is properly classified as a firearm under the NFA.

Pursuant to the plain language of the statute, ATF and its predecessor agency have long held that a pistol with a barrel less than 16 inches in length and an attached shoulder stock is a NFA “firearm.” For example, inRevenue Ruling 61-45, Luger and Mauser pistols “having a barrel of less than 16 inches in length with an attachable shoulder stock affixed” were each classified as a “short barrel rifle…within the purview of the National Firearms Act.”
END_OF_DOCUMENT_TOKEN_TO_BE_REPLACED 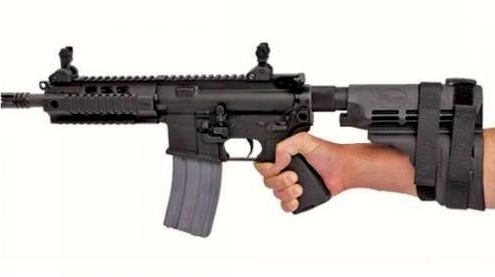 We are all familiar with the inconsistency of the ATF. The ATF has changed their position on the Sib Brace (SB-15) with a pistol. While the ATF, still states that it is legal to use the SB-15 as intended (strapped to your wrist), they have reversed their position on using the SB-15 when shouldered.

You may remember that earlier this year, ATF stated that since the SB-15 is not intended to be fired from the shoulder, the misuse of an individual would not change the classification of the firearm. See the March ATF SB-15 letter

We believe that this is the correct decision and interpretation. The problem is that someone else recently asked the same question and got a very different answer. ATF has now stated that the misuse of the SB-15 (being fired from the shoulder) does create an SBR and make the pistol subject to the NFA. 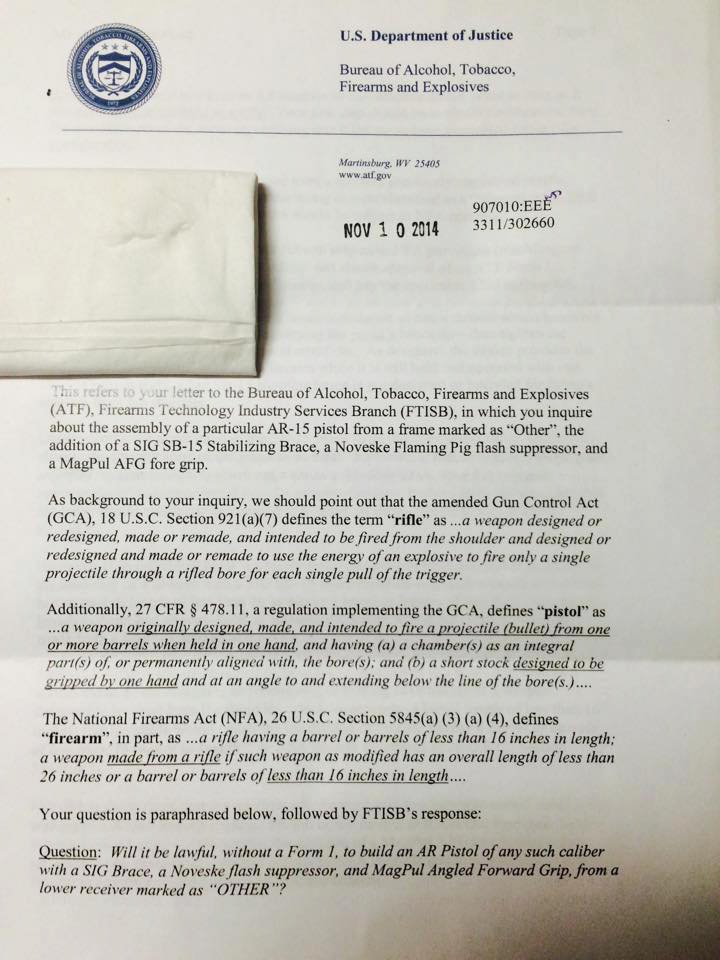 END_OF_DOCUMENT_TOKEN_TO_BE_REPLACED

Unlike most states which have changed the laws, In Florida you can hunt with Suppressors starting today.

END_OF_DOCUMENT_TOKEN_TO_BE_REPLACED

In the last few days a letter has surfaced on the Internet reportedly written to a small shotgun maker, which states that shouldering a Sig Sauer SB 15 pistol stabilizing brace could change a firearms classification to a short barrel shotgun.

The letter was written in response to Black Aces Tactical’s request related to a short-barreled shotgun that was designed to incorporate the SB 15 Brace. Black Aces Tactical submitted a sample which they say had an overall length of 27 inches. The sample had a SigTac SB15 arm brace attached as well as a vertical foregrip. The brace is intended to allow a shooter to fire and an AR pistol with one hand using a Velcro strap to attach to the arm.
END_OF_DOCUMENT_TOKEN_TO_BE_REPLACED

Great news! The ASA is reporting that the time to process a Form 4 with a Gun Trust has continued to decrease and looks like the time will continue to decrease. Less than a year ago the average wait time was in excess of 12 months. A few months ago the time was reduced to 6-9 months. The current time is 4-6 months, and if you are processing a trust now, you could see an even shorter time as ATF clears their backlog. ATF is continuing to hire and train more people to process the increasing number of ATF Form 4s and Form 1s.

Even better news is that we may see a new electronic Form 4 announced in January at the Shot Show.