If you are interested in a real NFA Trust or Gun Trust and looking to implement it quickly and without the additional cost of a lawyer being involved we are offering a special on the Online version of the Gun Trust for only $199.

This is anywhere from 1/2 to 1/3 of the normal price of the Gun Trust with legal support. The Online Gun Trust comes with a great manual which describes and give examples and hyperlinks to sample forms to purchase NFA firearms. It can deal with people who live in multiple states and allows you to add 3 additional authorized users. Additional authorized users can be added with an Amendment.

Many people are rushing to put their regular firearms in a Gun Trust in an attempt to protect their ability to allow children and grandchildren to use them when they are old enough and in an attempt to offer protections from pending legislation which would restrict the right to transfer firearms to future generations.

END_OF_DOCUMENT_TOKEN_TO_BE_REPLACED

While there is no actual Assault Weapon Ban, we are being asked many questions about regular firearms and the benefits of a Gun Trust. As laws may change or what is proposed may be different from what actually happens, the answers below be reviewed with your local Gun Trust Lawyer® and we should all re-evaluate the situation when things become more certain.

Should I put my regular firearms in a Gun Trust?

Yes all firearms, accessories, and magazines should be put in a Gun Trust and the sooner you do it the more flexible your choices will be. A risk is that future transfers of certain guns (sounds like most guns) will be prohibited. If this happens you will not be able to transfer them to a Gun Trust. In addition, there are many other reasons why you should have your regular firearms in a Gun Trust See this article on putting Title I firearms in a NFA or Gun Trust.

END_OF_DOCUMENT_TOKEN_TO_BE_REPLACED

Many of you have asked your estate-planning lawyer about Gun Trusts and have not been able to find anyone who knows about them. This is not hard to believe because other than some materials I have produced or talked to others about there is no text book on gun trusts.

We work with lawyers in every state to help them prepare gun trusts for clients in their state while providing them a resource for the knowledge and information necessary to understand the ownership, transfer and possession of firearms.

In 2006, I recognized the need to create a Trust for NFA and regular firearms. It was at that time, that I created the Gun Trust. A Gun Trust is based on the traditional concepts of estate planning. Traditional trusts deal with all types of assets that are primarily financially based, but a Gun Trust only deals with firearms. They are not meant to circumvent federal or state laws, as many would have you believe. Trusts were clearly contemplated as owners of firearms by the National Firearms Act. The National Firearms Act (NFA), requires a tax to be paid to own, possess or transfer guns such as machine guns, short barreled rifles and shotguns, silencers or sound suppressors, and AOWs. They are referred to as Title 2 firearms because they are regulated under Title 2 of the 1968 Gun Control Act. Normal firearms are regulated under Title I of the Gun Control Act. Many people mistakenly call them Class 3 weapons, but Class 3 refers to a license or Special Occupational Tax (SOT) that an FFL must obtain prior to buying or selling Title II Firearms.

END_OF_DOCUMENT_TOKEN_TO_BE_REPLACED

A Class 3 license is a license that a dealer obtains to sell Title II Firearms. Many individuals incorrectly confuse the terms Class 3 and Title II. We even see some lawyers making the same mistake. Class 3 SOT is a license to sell. Title II is classification of firearm that a Class 3 SOT may sell.

So the answer is no! You do not need a Class 3 license to buy a silencer or other Title II firearm unless you are a dealer and wanting to purchase them for resale. If your documents do not use the correct terms, the people who wrote them may not understand the NFA, ATF and issues relating to the purchase, possession, transfer, and use of Title II firearms.

END_OF_DOCUMENT_TOKEN_TO_BE_REPLACED

With that being said we have seen many documents marketed as gun trusts or NFA gun trusts that are not really designed for NFA much less any firearm. Some which appear to be designed for firearms strictly limit the property or assets that they can hold to NFA firearms.

This is a mistake and any trust you use to hold firearms should be designed to hold all types of firearms, ammunition, and other firearms related items like scopes or optics.

END_OF_DOCUMENT_TOKEN_TO_BE_REPLACED

We often get requests for referrals and while we keep the information on our clients confidential we recently had a client send us and email which they gave us permission to publish. Andrew originally purchase a trust from a local attorney because of a recommendation based upon price and it was not until months later that he found out about gun trusts and how a gun trust is very different from a regular trust.

Often times people will ask me, “How much money should I spend on a gun for self-defense?”. I usually respond by asking, “How much is your life worth?”. The implication is that one would typically want a good insurance policy if they are insuring something of great value & should not cut corners in an effort to save a few bucks. I should have applied the same principle to setting up my NFA Gun Trust.

I initially went with another law firm to draft my Trust because the price was very cheap & because the lawyer represented a known SOT/Class 3 dealer. The first Trust that was drafted for me was nothing more than a standard Trust. It was 3 pages long including the cover sheet & did not mention the NFA, ATF, Form 1, Form 4, Form 5, Form 20 or even that the items to be held by the Trust should not be accessible to “prohibited persons” or minors. I e-mailed Mr. Goldman of Law Office of David M. Goldman PLLC to inquire about having a true NFA Gun Trust drafted.

END_OF_DOCUMENT_TOKEN_TO_BE_REPLACED

Think the ATF or BATFE ignores possession and transfer of firearms, think again. Today the ATF announced that it arrested and charged 15 individuals who face between 10 and 70 years for many firearms related crimes including the unlawful manufacture of firearms and possession of an unregistered firearm.

11 of the 15 were arrested on Wednesday during a round-up. Remember that an improper transfer or possession of a NFA firearm or Title II firearm could result in severe penalties and criminal charges. These include up to 10 years in jail, a 250,000 penalty, and loss of your firearms.

Using a Professionally designed Gun Trust instead of a revocable trust or free trust that a dealer gives you can help protect you and your family from unfortunately events like this. Our Gun Trusts have been designed by Gun Trust Lawyers® to help with the ownership, possession, transfer, and use of Title II firearms.

END_OF_DOCUMENT_TOKEN_TO_BE_REPLACED

With Dove season just around the corner, Texas is becoming one of the growing list of states that allows the use of silencers when hunting.

A silencer is a Title II Firearms which is restricted by the National Firearms Act and can only be sold by dealers who have a Class 3 SOT license. (They can also be purchased second-hand from individuals using the same ATF Form 4). Because of their classification they require a $200 Tax stamp and approval from the ATF or BATFE before you can take possession of them.

Other states including Texas have previously allowed the use of silencers when shooting varmint but not on game. While the law was passed in March, Texas hunters have been patiently awaiting September 1st to legally use silencers while hunting.

END_OF_DOCUMENT_TOKEN_TO_BE_REPLACED 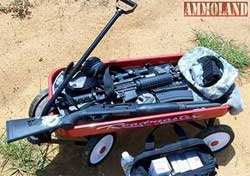 AmmoLand has posted an article on Gun Trusts which has a good explanation of Gun Trust and why traditional estate planning is not appropriate for firearms collectors or owners. It also goes into some details on how a gun trust works, benefits of a gun trust, and how asset protection for your firearms can be accomplished. (This concept of this article was prepared by my office)

A new M-16 can be purchased for $1200-1500, but can only be purchased by police or military, while a legally transferable pre 1986 Machine gun will cost you 10 times that amount.

So for those of you who are looking at a Gun Trust as a way to purchase an inexpensive machine gun, forget it. Not only is a machine gun expensive to buy, but its more expensive to feed. Many shoot 600-900 rounds per minute and the typical magazine will last a second or two.