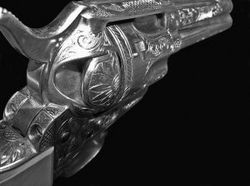 At first glance, Florida has a funny quirk with the way firearms are defined that allows a Felon to possess certain firearms that are not defined as firearms under Florida law.  Upon further investigation, the federal law also exempts antique firearms from the definition of a firearm.  I was recently asked if a convicted felon could possess a black powder gun for hunting in the state of Florida. The answer to this question depends on the gun itself.

Florida Statutes 790.001(6) defines a Firearm as as any weapon (including a starter gun) which will, is designed to, or may readily be converted to expel a projectile by the action of an explosive; the frame or receiver of any such weapon; any firearm muffler or firearm silencer; any destructive device; or any machine gun. The term “firearm” does not include an antique firearm unless the antique firearm is used in the commission of a crime.

So it would appear that a Felon could own certain black powder guns in Florida as long as the firearm was not used in the commission of a crime.  There has even been some case law dealing with black powder firearms owned by a felon.

In 2005, Florida’s 5th DCA, affirmed the lower courts ruling that David Bostic, a convicted felon, had violated the law by being in possession of a firearm.  Bostic had claimed that his black powder firearm was an antique firearm and thus exempt from the restrictions place upon him.  The court agreed that he was able to own an antique firearm but disagreed that his firearm was an antique.  The court stated that Florida case law defines replica as a reasonably exact reproduction of the object involved that, when viewed causes the person to see substantially the same object as the original. The DCA found that Bostic’s gun was not a replica because the original did not have a fiber optic sight that was present on his gun.  The court also stated that merely having an ignition system similar to that found on an antique firearm is not sufficient to render a firearm a “replica” of a firearm manufactured in or before 1918.

In Williams, the Florida Supreme Court in dicta dealing with the concealment of an antique firearms states that the result of such an interpretation to allow convicted felons to be in possession of antique firearms is absurd.  And that a basic tenet of statutory construction is to not yield an absurd result.